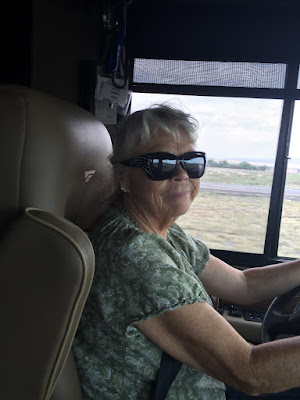 We arrived in Kentucky the afternoon before my birthday.  Five days of driving.  Stopping only to sleep and then drive on.  We  have decided next time things will be a little different. 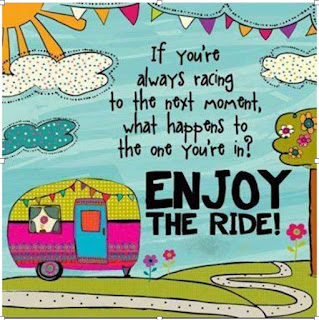 My anxiety level was not nearly as severe as it was last year and so Precious Husband allowed me to try my hand at driving The Beast.  Originally we named our 40 foot motorhome The Great Adventure Bus at the suggestion of our grandson Trent.  Then reality struck and the bus became The Beast.  I mean really - she is BIG, intimidating, and at times has a mind of her own over powering our plans and causing detours and delays.  The Beast fits.

Learning to drive the bus has helped make friends.  I understand a little better how she works and what I can expect.  I am hoping now we can go back to calling her The Great Adventure Bus.  Don't you agree it has such a better sound to it?

My birthday was shared with my 10 year old granddaughter, Ava Dorothy on Saturday.  We both love potato soup so Michelle made a big pot of it - oh, was it ever good.  Ava enjoyed the cake and ice-cream as much as I did. 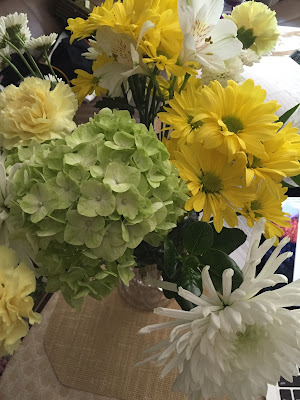 I am still enjoying the flowers from Dallas, Michelle and the grandkids.  So cheerful! 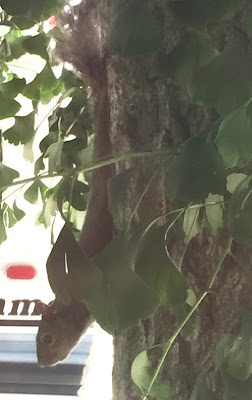 I spotted this little guy today.  He is a little hard to see here but he is quite cute and I will enjoy watching him scamper up the tree every day.

Hopefully tomorrow Precious Husband will put up my bird feeder and my hummingbird feeder.

So thankful to God for his watch and care over us as we travelled the 1800 miles to get here.

The Bible, God's Word.  It is full of promises BUT, yes, BUT.  With God's promises come conditions or commands.


We want the promises BUT do we want to be obedient to the command or condition?  Remember Abraham.  God gave him a promise but it also demanded obedience.  By faith Abraham, when he was tested, offered up Isaac; and he that had received the promises offered up his only begotten son.  Hebrews 11:17

Psalm 16:11says, In Your presence is fullness of joy.  I am promised joy BUT I have to be in God's presence.  I have to be in the Word, in prayer and in communion with Him daily to enjoy the blessing , the benefit the promise of joy.

Beauty In The Eye of the Beholder 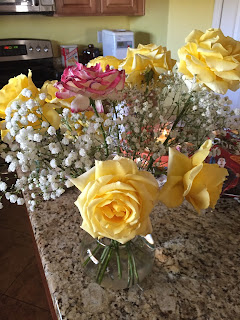 Beauty is in the eye of the beholder they say.
This is used to express the fact that not all people have the same opinions about what is attractive.

The yellow roses above came from my backyard and they are beautiful.  They were left is this condition when we left the house to return to our motorhome.  Returning we found they were dried and brittle.  When they appeared in a new arrangement I continued to see beauty.  Precious Husband, not so much.  He even inquired a few times about when I was going to throw the dead flowers away. (Later he did admit it was not the dead flowers as much as that they were hindering his view of the TV.  😍

Beauty is in the eye of the beholder the world says.

Our precious 80 year old neighbor in the RV park lives full time in a mobile home and she has a wonderful inviting front yard.  Recently we discovered her very distraught.  She had little yellow flowers that came up voluntarily and the park landscapers had sprayed them because they are actually considered weeds.  She was so upset telling us that she has made it clear that she knows they are weeds but she nurtures them and thinks they are lovely and has told the management not to spray them!  (Evidently the word was not passed down.)

Beauty is in the eye of the beholder the world says. 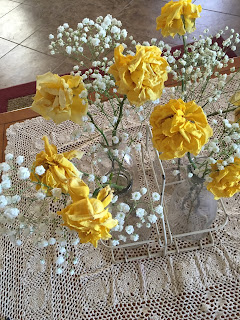 Beauty is in the eye of the beholder the world says.  But God's Word tells us where true beauty resides for women.  No supposition here.  Biblical fact.  God's Word says it and I believe it.

I pray God to help me daily be obedient to His Word.

Do not let your adornment be merely outward—
arranging the hair, wearing gold, or putting on fine apparel—
rather let it be the hidden person of the heart,
with the incorruptible beauty of a gentle and quiet spirit,
which is very precious in the sight of God.

Email ThisBlogThis!Share to TwitterShare to FacebookShare to Pinterest
Labels: Faith

Thankful Be For True Joy

I find great blessing in the fact that God has given me a heart that finds joy and happiness in "the little things".   It does not take a lot for me to smile or giggle at something my day has presented in some form.  Precious Husband smiles when he sees me smile or giggle and that makes me smile even bigger too.

Of course as a Believer my greatest joy is that my heart finds rest, peace, confidence, security and true joy in putting my faith in God and what Jesus Christ did for me on the cross.  Thank You Jesus!


Psalm 90:14
Satisfy us in the morning with your unfailing love, that we may sing for joy and be glad all our days.

Psalm 5:11
But let all who take refuge in you be glad; let them ever sing for joy. Spread your protection over them, that those who love your name may rejoice in you.


The Lord is my strength and my shield; in him my heart trusts, and I am helped; my heart exults, and with my song I give thanks to him.

Email ThisBlogThis!Share to TwitterShare to FacebookShare to Pinterest
Labels: Thankful Be! 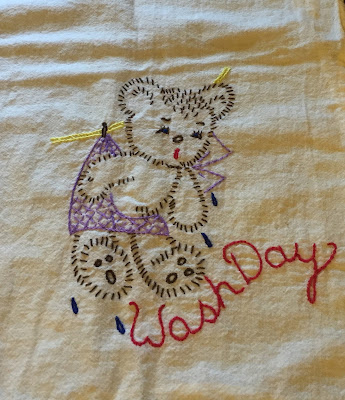 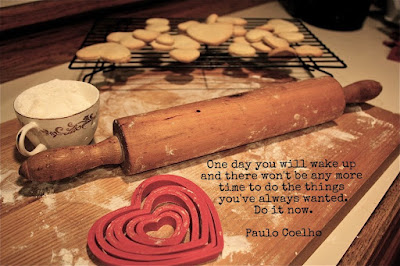 Get the yellow bowl out and try the best cookies ever!  These cookies are even better the next day.  Last week I mailed them to my oldest grandson in Kentucky and the delivery notice in the dorm got pushed to back of mail box and so they were actually a week old when he got them and yet he said they were great.  I love a "pretty" cookie and these come out of the oven thick and wonderful full of gooey chocolate, almonds and coconut.  Yum!  I added white chips too as you can see below.

In a large bowl, cream the butter and sugars together. Beat in the eggs, one at a time, stir in the vanilla. Stir in the dry ingredients until well mixed then stir in the chocolate chips, coconut and almonds. Drop by rounded tablespoonfuls onto the prepared cookie sheets.

Bake for 8 to 10 minutes. Cool on baking sheet for 5 minutes before removing to a wire rack to cool completely. 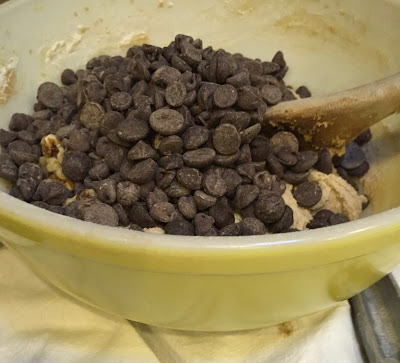 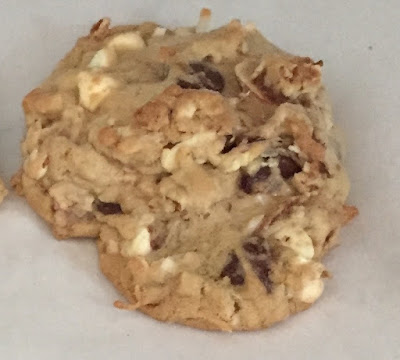 Please be blessed by visiting Jes at http://strangersandpilgrimsonearth.blogspot.com 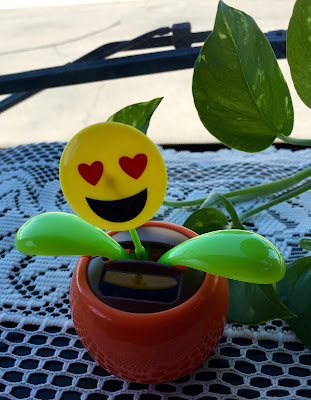 What does it spell?

I always remind Precious Husband that it doesn't take much to make me smile.  Personally I think this is a good thing.  Precious Husband smiles when he sees me get excited picking out inexpensive little yellow dancing flowers that will make us both smile (hopefully a long time) as we travel down the highway.

My prayer in life is that I always will be satisfied and content with the small little daily blessings that come our way.  God does give us daily blessings if we just keep our eyes and heart open.

Praise the Lord.
Give thanks to the Lord, for he is good;
his love endures forever.
Psalm 106:1 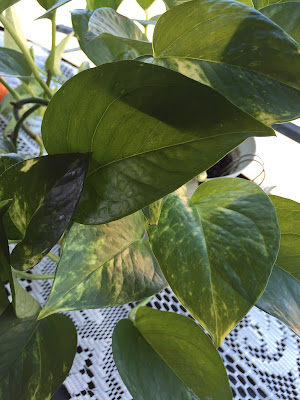 The Lord is my strength and my shield; my heart trusts in him, and he helps me.
My heart leaps for joy, and with my song I praise him.
Psalm 28:7 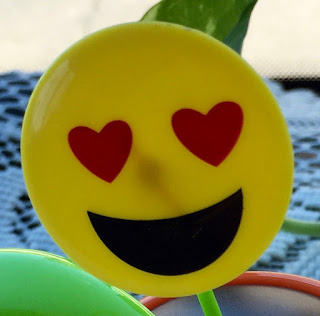 Praise be to the Lord forever! Amen and Amen.
Psalm 89:52 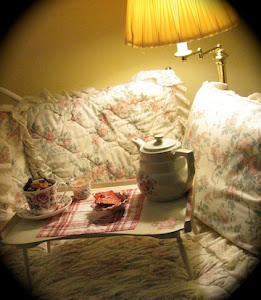